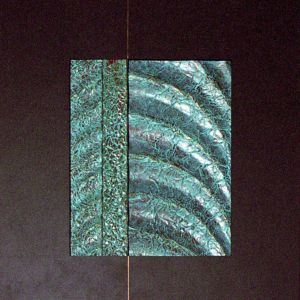 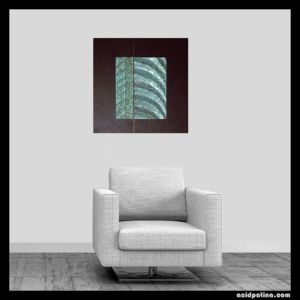 A slow walk on one of New Zealand’s remote sandy beaches revealed the wondrous patterns nature makes so effortlessly. My studies at the time were related to the mathematical structure of nature, so I was intrigued how math could be used to reproduce these patterns left in beach sand as the tide goes out.

Sacred geometry and the Fibonacci numbers were used to produce the size and shape of the wave forms. Both are cited as being fundamental in the patterns formed by nature.

To add complexity to the design, thin copper foil that was to be hand-crumpled was used. Although the crumpling of the copper foil is ‘organic’, the folds and creases that are formed are fractal-like and fall within a fairly small deviation of sizes and patterns due to the inherent properties of the material. A vertical band of this fractal pattern cuts sharply through the orderly waves.

A blue-green copper patina would tie the artwork back to the marine source of inspiration.

Plaster has been sculpted to produce the wave forms. Crumpled copper foil has then been bonded to the plaster substrate. Finally, the bright copper has been finished with a marine blue-green patina and protected with a clear lacquer.

Variations can be made to order. Custom orders welcomed. Email to place order or enquiries.